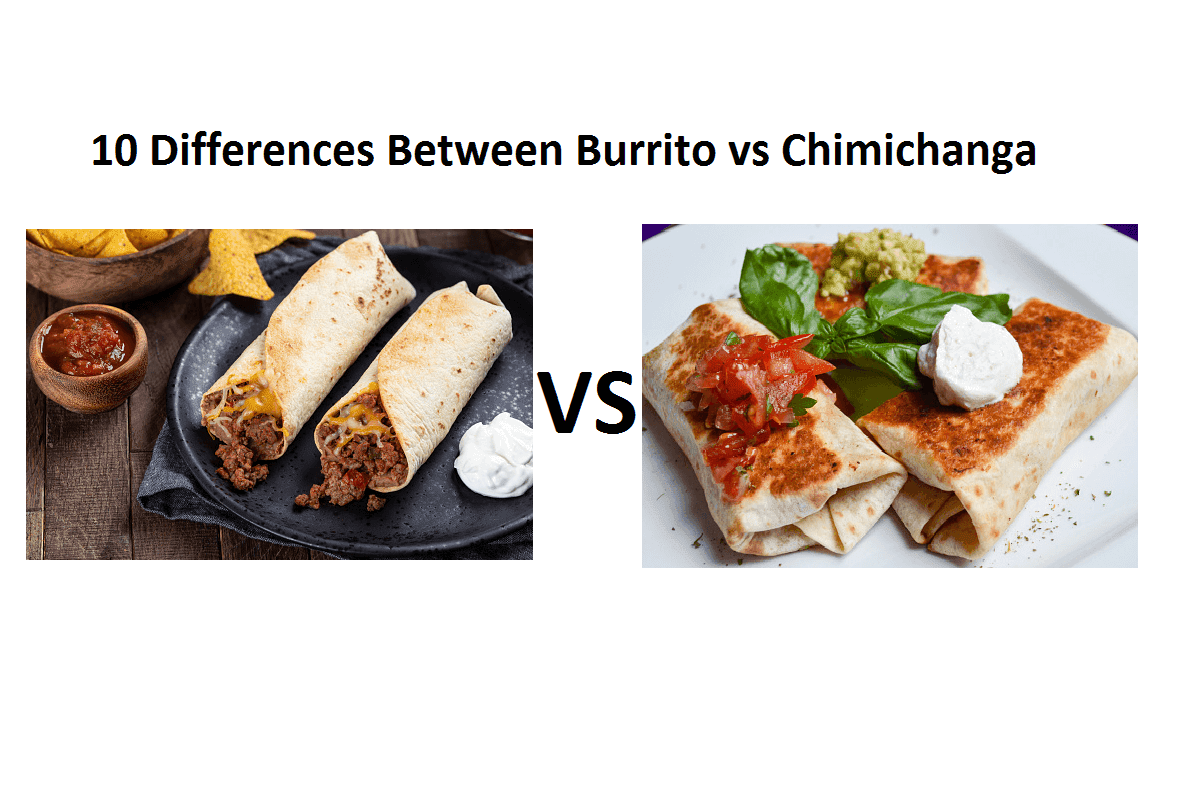 What is the distinction between a chimichanga and a burrito? While there are many similarities between the two, there are also some differences that should be considered.

There is, however, one distinct difference that distinguishes a chimichanga from a burrito.

All of the information about burrito vs chimichanga is provided below. Please read the details below before letting us know which one is your favorite!

What exactly is a burrito?

After that, a burrito is rolled into a large wrap. When you order a burrito from a fast food restaurant, it is usually wrapped in foil or parchment paper.

Burritos are then held in your hand as you eat them from fast-food restaurants or fast-food chains. When you order a burrito at a Mexican restaurant, it will usually come with a large tortilla shell that has been packed to the brim and wrapped before being served on a plate. It can be topped with a cheese sauce.

How do burritos get their shape?

Burritos began as a small tortilla filled with a few ingredients such as rice and beans, cheese, or meat. This is how it was traditionally served in Mexico.

Depending on where you are and what type of establishment you are in, you can now find a burrito, ranging from the traditional to a loaded supreme burrito decked out with all kinds of goodies.

How do you eat a burrito?

Burritos are typically served wrapped in paper and eaten with one hand. I know that depending on whether you’re at a fast-food restaurant or a sit-down restaurant, burritos may be served on a plate and topped with various types of toppings.

Burritos and chimichangas are frequently confused, but there are many distinctions between them. We’ll look at what each of them is first, then the many differences between the two types of Mexican food. Let us start with the burrito.

What exactly is a chimichanga?

Although chimichangas are sometimes referred to as fried burritos, which is technically correct, there are other differences that distinguish them.

Chimichangas are made with a soft tortilla shell filled with meat, usually chicken, beef, or seafood. Typically, the meat is cooked with onions, peppers, and a sauce such as an enchilada sauce or salsa. The meat is rolled into a tortilla shell before being deep-fried.

What goes into making a chimichanga?

Chimichangas are made by layering slow-cooked meat, peppers, onions, red sauce, and seasonings in a large tortilla shell. These ingredients are rolled together to form a tortilla shell, which is then deep-fried. A chimichanga is frequently served with queso or cheese sauce on top.

How do you eat a chimichanga?

A chimichanga is typically served on a plate and topped with queso or another type of cheese sauce. Chimichangas are typically accompanied by refried beans, Mexican rice, pico de gallo, lettuce, sour cream, and guacamole.

Because chimichangas do not contain all of these ingredients, only meat and peppers along with the sauce, they are typically served with rice and beans alongside the chimichanga. In this way, they are similar to but not the same as burritos.

What’s the distinction between a burrito vs chimichanga?

Chimichangas and burritos are frequently confused. Despite the fact that they are both wrapped in a soft tortilla shell, one is deep-fried while the other is not. Other differences include the ingredients used to make them. A detailed explanation of the differences between a burrito and a chimichanga is provided below.

A burrito and a chimichanga are prepared differently in that one is fried and the other is not.

The ingredients in a chimichanga and a burrito are also very different. A burrito is filled with a variety of ingredients, including rice, meat, vegetables, beans, and sauces like guacamole, sour cream, and salsa. Chimichangas, on the other hand, are filled with slow-cooked meat, peppers, onions, and sauce.

While burritos are loaded and tightly rolled to form a large tortilla wrap, chimichangas are deep-fried and sometimes topped with cheese sauce before being served with sides like rice, refried beans, pico de gallo, and guacamole.

Burritos are frequently served as a handheld wrap at fast-food restaurants. They are also available on a plate at sit-down restaurants.

Chimichangas, on the other hand, are served on a plate after being deep-fried and occasionally topped with cheese sauce. Chimichangas are served with refried beans, pico de gallo, guacamole, and Mexican rice as sides.

A burrito and a chimichanga have distinct appearances. Burritos are typically very large and wrapped in a large soft tortilla shell. They are brimming with delectable treats. Chimichangas, on the other hand, are deep-fried and served with a variety of sides. Chimichangas are smaller than burritos in size.

Chimichangas contain slow-cooked meat, peppers, onions, and sauce. Depending on the sauces and seasonings used, it either could be mild or spicy.

Chimichangas, on the other hand, are served on a plate and eaten with a fork and knife. It’s unusual to find a chimichanga that’s served wrapped, eaten and held in your hand.

A burrito’s origins are in Mexico. The original burrito is a simple dish made with a soft tortilla shell and a few ingredients such as rice and beans, meat, or cheese.

Chimichangas, on the other hand, are unknown how they came to be, but it is speculated that they originated as a burrito modification. Chimichangas did not most likely originate in Mexico, but their exact origin is unknown.

Sauces and dips are available for both burritos and chimichangas. They are usually served with salsa, guacamole, sour cream, or even hot sauces, either in them or as a side to dip them in.

Which One Is Authentic Mexican?

Because it is unknown where Chimichangas originated, it is impossible to say for certain that they are authentic Mexican. They most likely aren’t.

Is a Chimichanga nothing more than a fried burrito?

Chimichangas, like burritos, are only filled with meat, peppers, onions, and a sauce such as an enchilada sauce or salsa. They are then deep-fried and sometimes topped with a cheese sauce. Burritos, on the other hand, typically have a greater variety of fillings and sauces.

What’s the distinction between a Burrito Enchilada and a Chimichanga?

Chimichangas are made with a soft tortilla shell, usually made of flour, that is filled with slow-cooked meat, such as chicken, peppers, onions, and enchilada sauce or salsa. These tortilla shells are then tightly wrapped around the filling before being deep-fried.

Enchiladas, on the other hand, are typically made with corn tortillas, filled with slow-cooked or smoked meat, and baked with sauce on top.

What distinguishes a Chimichanga?

The most recognizable aspect of a chimichanga is that it is deep-fried after it has been assembled. But first, a chimichanga is made with a soft tortilla shell, typically a flour tortilla. It is then stuffed with slow-cooked meat, peppers, onions, and a red sauce, similar to salsa or enchilada sauce.

This filling mixture is then tightly rolled into the soft tortilla shell. After that, the tortilla is deep-fried. It is sometimes covered in a cheese sauce after it has been fried, but this is optional.

Chimichangas are typically served with beans, Mexican or yellow rice, pico de gallo, guacamole, or sour cream on the side.

Which is larger, the Chimichanga or the Burrito?

Are a chimichanga and a burrito the same thing?

Although burritos and chimichangas share many similarities, they also have significant differences. Both are made with large soft tortilla shells, typically flour tortillas, but this can vary.

Burritos are then filled with a variety of rice, beans, meat, vegetables, and sauces.

Chimichangas, on the other hand, contain slow-cooked meat, peppers, onions, and a red sauce, such as salsa or enchilada sauce. This wrap is then deep-fried, giving it the distinct flavor of a chimichanga.

Chimichangas are typically served with side dishes such as refried beans, rice, pico de gallo, guacamole, and sour cream, as opposed to burritos, which are filled with all of the goodies inside.

What Is the Difference Between a Burrito and a Chimichanga?

Burritos and chimichangas are frequently confused with one another. Although they are very similar, there are some key differences that distinguish them.

While one is adorned on the inside with all of the ingredients, the other is very basic, deep-fried, and usually served with side dishes that may or may not be included inside the other.

Would you rather have a burrito or a chimichanga now that you know the difference between the two? They are both very tasty to eat!

If you enjoy cheesecake factory butter with your bread, then this recipe post is eager to assist you in making this delicious and yummy butter in your own kitchen. It is one of the food zone's...

We are extremely proud of our one-of-a-kind concept. But that doesn't mean we've arrived. Angry Crab Shack is constantly changing our menu and innovating in the kitchen, all while serving the...